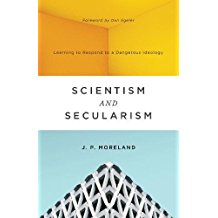 What is scientism? Dr. Moreland gives us a functional definition (p. 27), that “the hard sciences … provide the only genuine knowledge of reality,” along with one (p. 229) that boils the matter down to a precise term , that is, “strong empiricism.” I would add that it is historically an extension of a dialectical or even neo-Gnostic view of reality such that the scientifically enlightened person is the one who truly understands the world. It is as though the scientist represents the world’s new priestly class.

The extent to which scientism can be taken was the theme of Science Unlimited, which I have previously reviewed. In that work a number of philosophers of science struggled with the question of how far scientism can go. The end meaning is this: The conversation among philosophers is going to go on for a long time. But scientism is no panacea for the world’s problems. Though some of the authors in Science Unlimited go that direction it is a tenuous one at best.

While Dr. Moreland provides some valuable insights in this work there are some glaring weaknesses. It reads like a collection of essays bundled with some new ones that address the topic of the book. As a result we have a discussion of foundationalism vs coherentism, a rabbit trail that contributes little or nothing to the discussion. Along with this is some discussion of ID and the commonly defensive posture that is a part of so many apologetic works as he declares “Five Things Science Cannot In Principle Explain (But Theism Can)” in chapter 12. If you’ve already read Theistic Evolution: A Scientific, Philosophical, and Theological Critique then about half of the book will be of use to you.

That negative aside there is a feature that might easily escape the reader. Dr. Moreland gives a bit of a cultural analysis that can provide some perspective. Cultural hermeneutics is popular but not usually among philosophers and Christian apologists. Give this content and subtext the attention that it deserved. It will be useful as you interact with others on the issue.

Should you buy this book? That’s a big Maybe. This is the type of effort where I wish he would have joined with some other apologist/philosophers to create a richer work. It’s a good work but it’s not everything that I had hoped it would be.