Outside Curve Cutting Jig for Your Bandsaw

I’ve been working on this little hall table. It’s raison d’etre is simple: Your basic, nice hall table is made for a house with a nice entry way that has — space. One of the PBS woodworking shows presented a demilune project table. It’s perfect for a house with a larger entry way. But your average home has the basic 30+ inch hallway. It’s enough for moving appliances around but not wide enough for a nice little hall table. 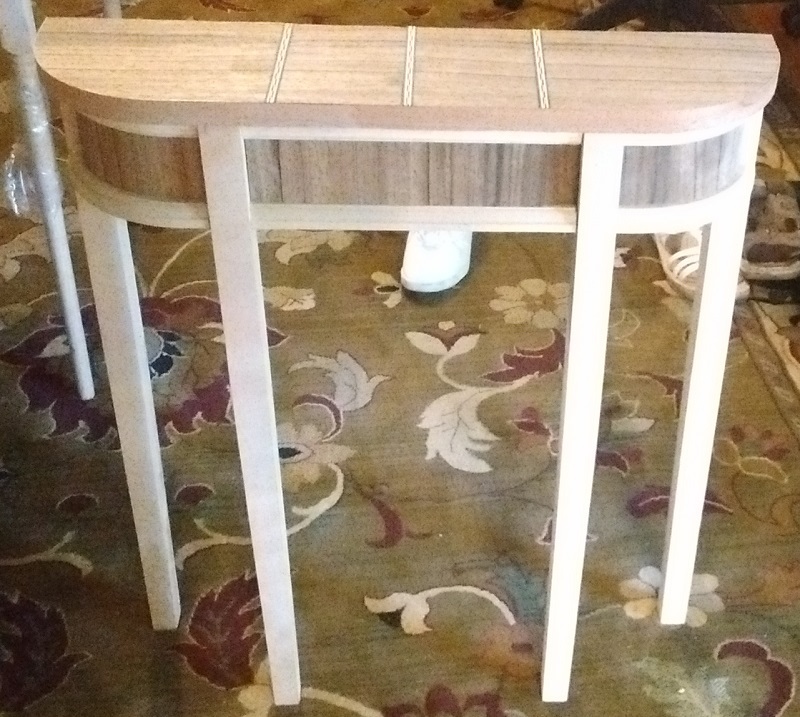 So I set about designing & building one (later I’ll publish the plans & template layouts) that’s roughly 5″ deep. That’s deep enough to be useful but not so deep as to block a hallway or be a bother in a room. It’s just there and it’s big enough to be useful.

One of the issues I faced was making nice, perfect curves. I’m using a template as the basis for sizing the pieces and wanted the template to have the perfect edge curve.  But whether or not you use the template approach getting a perfect curve is a must.

The reason for the jig was to avoid the sanding process.  If I can get a perfect curve from the moment the piece leaves the saw then I’ve done two things. The first is to minimize work.The less time on any project the sooner I get to the next one.

The second is to avoid the sander. I’m avoiding the sander because it’s a source for potential error. A little slip of the hand and the edge of the piece (whether finished piece or template) gets a flat spot. I want to avoid even the potential for a flat spot. This is the best way I could devise for that.

Normally one just cuts wide of a pre-drawn line and then sands down to the line. That’s fine and works for most. But I wanted to be able to cut the curve perfect the first time. And I wanted a tool that could be used to cut any size of outside curve and also be simple to use. This is the result. 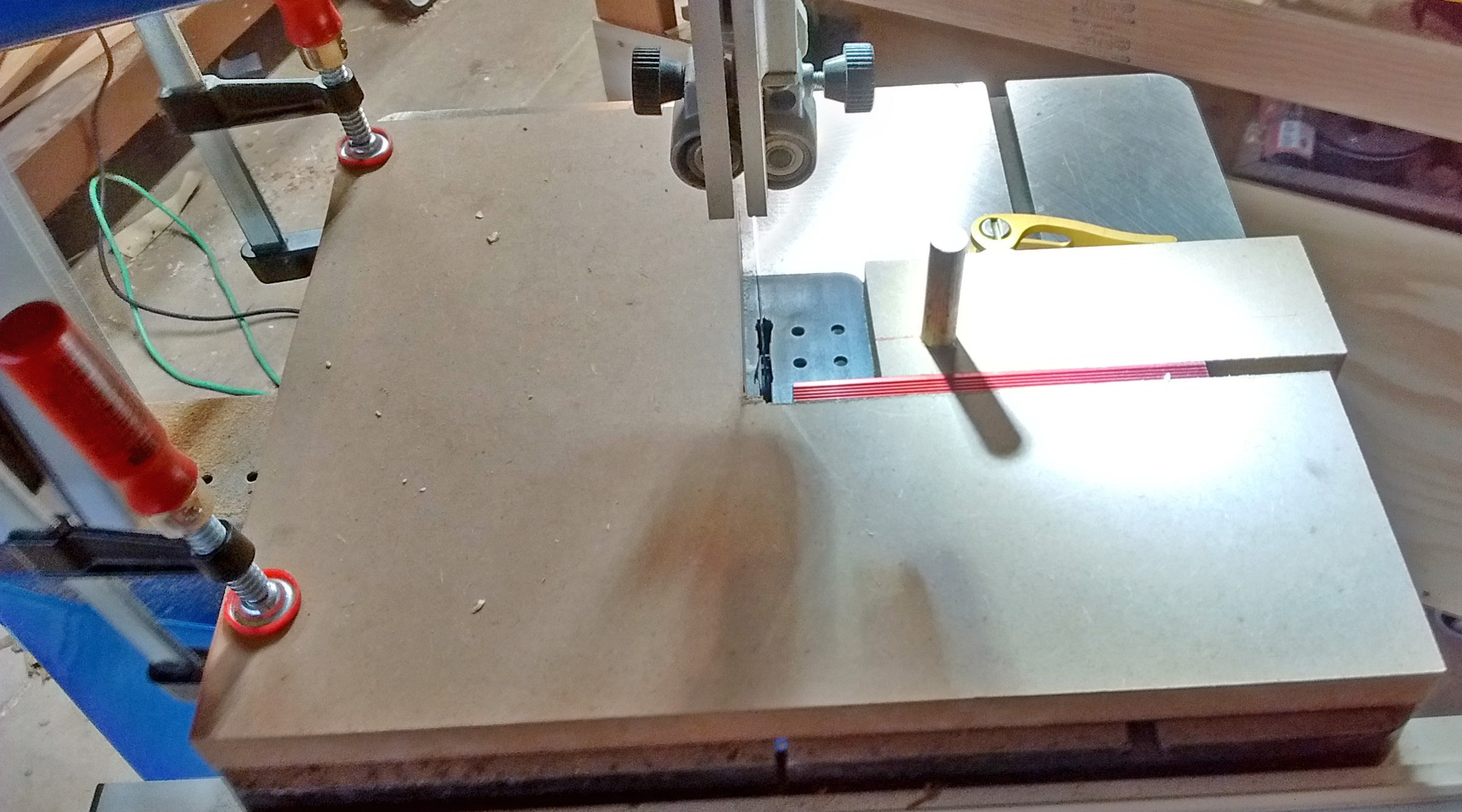 The heart of the jig is the sliding dowel section. This allows a simple adjustment of the radius of the curve.

The toggle clamp is also roughly 3/4″ thick so it sets out of the way when turning the piece being cut.

The red piece you see is a small section of t-track.  Just cut the size you need based on the size of your bandsaw and the curves you are cutting. My bandsaw is a medium-sized unit. a 10″ Steel City 50110. Not a pricey unit by any means. But quite capable. It’s strong enough to cut through curves with the proper blade and tension.  (I tried this with a little Delta BS100 and it worked but not well. Just a bit heftier unit was all that I needed.)

Using it is quite simple. In my case what I needed to do was to cut a curve with the radius the same as the depth of the table piece minus 1.25″ to accommodate the square side of the table leg. I’ve done the same thing in the example here but instead of 1.25″ I’ve gone with 1″.  This comes off of a 1×4, which is 3.5″ wide. That leaves 2.5″ so I’ve marked a spot and drilled a 1/2″ hole for the jig dowel. 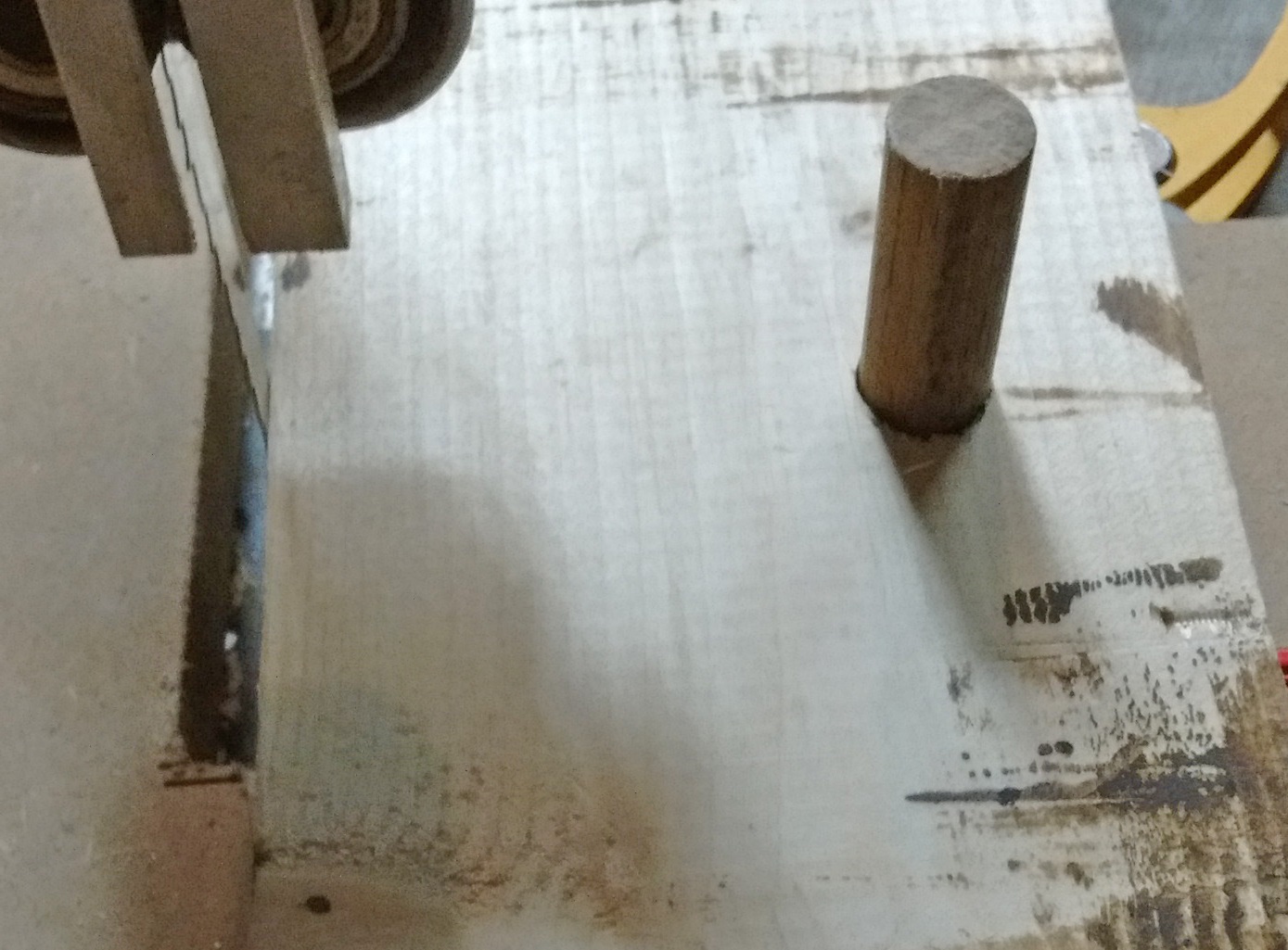 Once the dowel pivot hole is drilled then one just sets the distance from the dowel to the blade. You won’t need to use a ruler for this, at least if you’re doing something where the curve meets edge of the wood. In my case that worked out well. To set the distance just put the wood against the blade and lock down the dowel into position. That’s your radius, the analog way.

Also, the center point of the dowel needs to be in line with (or perpendicular to) the front edge of the blade. That makes for a correct cut starting point. 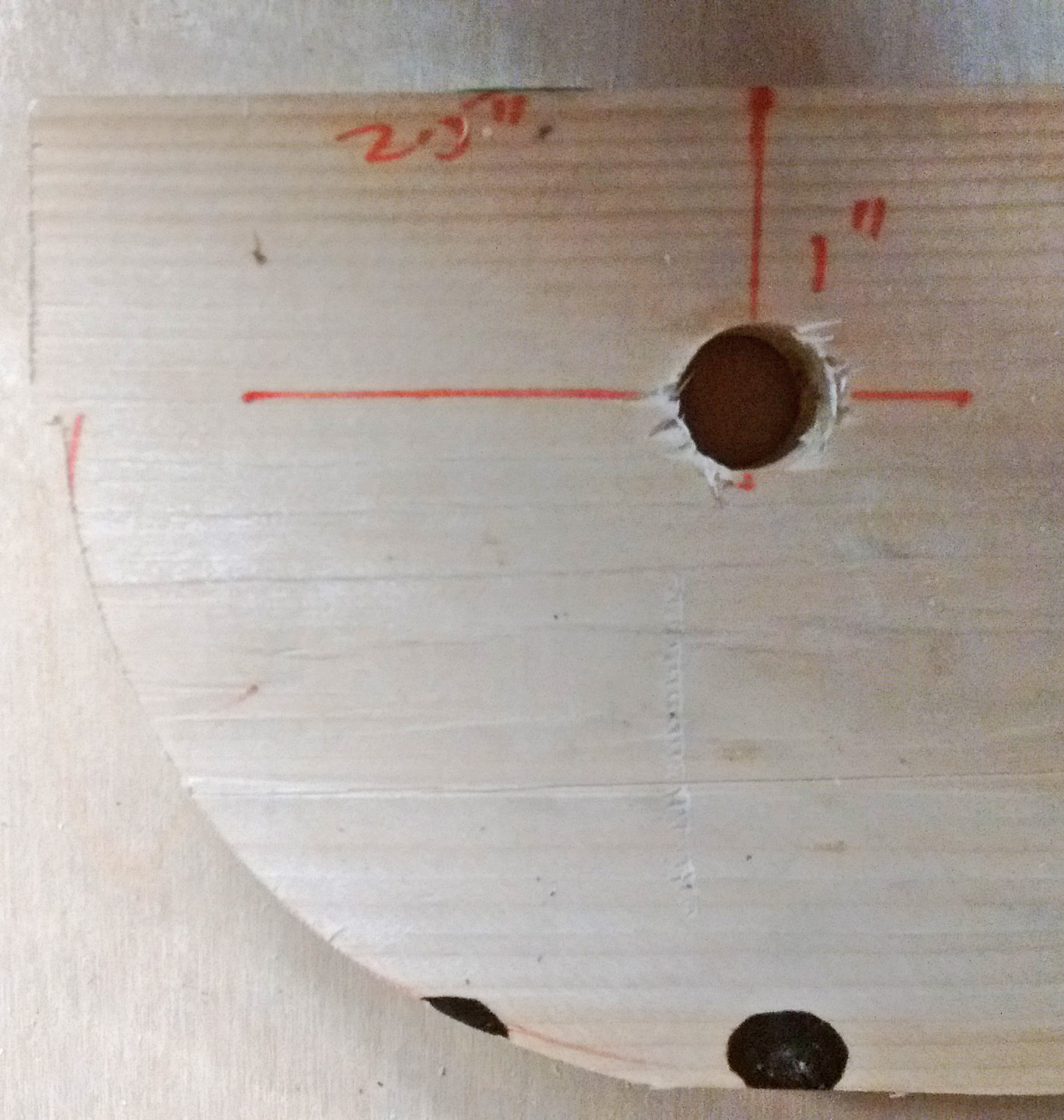 Cut the curve slowly. If your tension is good on the blade and you’re not using a blade that’s too wide then you should get a nice curve. Also, if you hole is out of position then you won’t meet at the other end of the board correctly.  In my case I didn’t mind because that end would be cut out for the table leg. But that may not be your case. So be certain to use a test piece.  (I’ve been known to kill a lot of trees but apparently I am not alone in that.)

It has worked out best for me to cut from the long edge of the piece to the short edge. Doing it the other way will leave your error on the long side. If that’s what is showing then you probably don’t want to do that. It’s easier to fix a short edge than a long edge.

It’s always a good idea to verify the accuracy of your curve. I just took a compass and drew a circle on which I could set the piece that was cut.

I’ve found that cutting too quickly can lead to a flat spot on the curve because of blade drift. Band saws really aren’t great curve cutters, but by going slowly you can get a nice smooth curve.

It was a perfect fit, a precise curve. No sanding.

Also, the results you get will vary based on the power of your saw, the type of blade you use, and the type and thickness of wood you are cutting. Your mileage may vary, as they say.  For my applications this is perfect for woods < 1″, especially the “masonite” type material used for templates.

Notes: I’m using 1/2″ dowel. The size you choose is not significant except with respect to how firmly it mounts in the jig. I found 1/2″ does the job nicely.

Also, I put a screw into the bottom of the dowel to spread it a bit and hold it firmly in place. That makes it removable for later use doing inside curves. Or, you could glue yours in place and make two dowel units, one for inside curves and one for outside curves.

A little later on I’ll show the jig’s use for an inside curve. I’m doing this because the production goal is to modify table design to more of a French-ish appearance by exchanging the outside curves for inside curves. But I’ve not got that one down or finished yet.

The Steel City 50110 is the same as the Wen 3962. There are other units which are nearly identical units and which are priced close to this model.  I chose it because it can do a resaw up to 6″ whereas the others have about a 4 3/8″ resaw height. It’s not that I’m going to be cutting pieces this thick. But what the extra height allows is, for me, more working room and convenience when cutting whatever. Space is good. It allows for more safety.