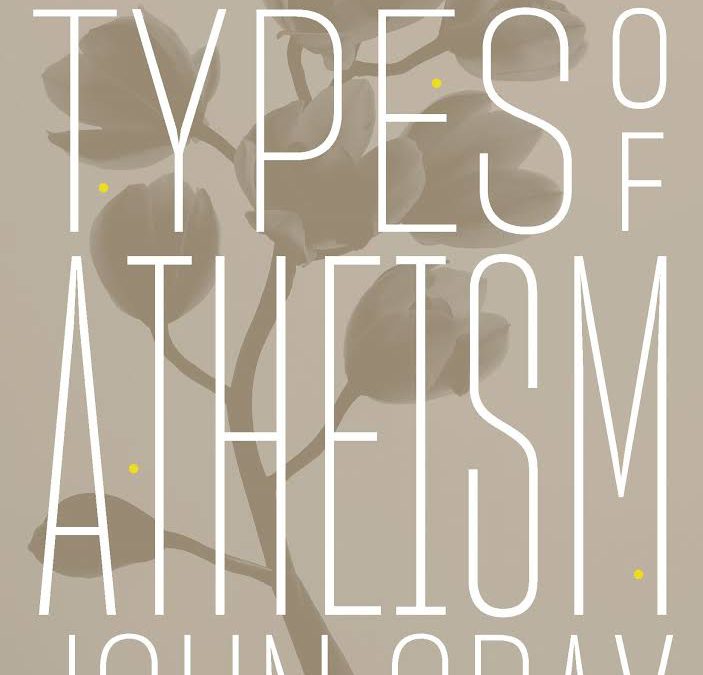 The Problem of Ideas
John Gray’s “Seven Type of Atheism”

My first reading of John Gray was his book “Black Mass, Apocalyptic Religion and the Death of Utopia.” It’s a good and useful piece, outlining the historic theological structure of the liberal/progressive movement. Oddly enough I first encountered it when reading DailyKOS, a radical leftist website which promoted it. My suspicion is that they promoted it after reading the only cover instead of the content. It effectively trivializes the modern liberal/left ideology. He shows them to be engaged in, shall we say, appropriation of Christian structures without giving due recognition.

I’ve enjoyed reading Gray’s material. By that I mean first that I enjoy his writing style. He writes with a clarity that few philosophers bring. Like Nietzche he cares none at all for what critics might say. So many write philosophy for clarity as they concentrate on style and precision. But Gray tends to pursue an historical perspective and framing of ideas (much like James Burke’s “The Day the Universe Changed”) rather than constructing mathematical solutions.It is a very “continental” approach to philosophy.

There’s a sense where the trivialization process continues in this latest work. He notes how certain segments of the various atheistic movements either borrow something from Christianity in their effort to supplant it or are obsessed with such a hatred for Christianity that they cannot leave it alone.

Those whom he assesses are writers and philosophers. He really doesn’t give scientists any recognition. His is an abductive argument, an historical picture as to how we got to where we are. It lacks the over-simplification one would find in the works of the “new atheists.” There are thread which begin in one chapter but end in another. That’s the way it ought to be as that’s the way history and ideas work.

There is something prescient about this work. In a society and culture which has lost hope there is a tendency to act out that loss of hope. A complete loss of hope expresses itself in suicide. When a whole group loses hope the whole group may commit suicide. When a celebrity commits suicide it is predictable that a number of people who find identity in either that particular celebrity, or the idea that celebrity is itself an important principle, will follow suit. They do. Though there may be other complicating factors it seems that a loss of hope is always present.

Anglo-American culture, basically the US and England, was built on hope. The hope of a better world was promised by postmillennial theology and was hijacked by progressive ideology. It has been reported that the first world war destroyed postmillennial theology (with its sense of hope) as the driving force for the church. It likewise destroyed the structures of postmill theology for the progressive. And so suffers Anglo-American culture.

What remains, what took root in Columbia University, and later in the whole of American culture, was a more radical, less idealized Marxism. Though the language of hope remains the mechanisms put in place always lead toward a statist end. The libertarian language in use has no meaning. There is no personal empowerment. The only empowerment in place is what the state allows.

Mr. Gray has painted for us is the image of a world that wants more than anything else to live without hope but cannot bring itself to figure out how to do this. It is the task impossible. Increasing rates of suicide should serve as evidence. What hope remains has been, as he acknowledges at various points through the book, glommed off Christianity.

For the Christian apologist the book is rich. That is, he includes some valuable content which one would likely not get in any graduate philosophy course.And why not? Because so much American philosophy instruction will provide the student first with the basics (Plato/Aristotle) then some modern works (Marx/Wittgenstein/Quine/Santayana/Cone), but not a flow of history. There’s only so much time to read. You might get to Dostoyevsky but maybe not to an interpretation of his works beyond the popular existential questions. Of course this will vary from school to school, but I think you get the picture. He draws the historic and philosophical connects that would otherwise not be understood in a student’s reading schedule. This is life-long reading in summary. The grad/post-grad philosophy student will appreciate that.

He exposes some of the blatant errors of worldviews that might otherwise go unnoticed. His language is brutally honest. People who are true believers will not want to read this book. It will offend. It’s about time someone does. Noteworthy is the principle of Gnostic influence in various atheistic circles. Some of it is, while true, seen in nuance. But at other times one may see it in how God is painted. Though he did not note this specifically, some of the atheists place God in the position of demiurge.

Above all else is the subtext that so many types of atheism depend on religious structures, with some even being built upon the very Christianity they attempt to defeat. He exposes the problem of scientism as an alternative religious system, along with statism, notably Marxist totalitarianism, as a political religion. (For a review of the structures one might read the first three chapters of Clouser’s The Myth of Religious Neutrality.)

He understand the problem of illiberalism and the is-ought dilemma (science cannot produce an ontological ethical foundation, p. 11). “It is not by accident that neither he [Harris] nor any of the new atheists promotes tolerance as a central value. If ethics can be a science there is no need for toleration. In fact all these versions of ‘scientific ethics’ are fraudulent, and not only because the sciences they invoke are bogus. Science cannot close the gab between facts and values. No matter how much it may advance, scientific inquiry cannot tell you which ends to pursue or how to resolve conflicts between them.” (p. 22)

The following quotes should provide the apologist with foot for thought, now and in the future:

“The vehemence of these attacks shows that Comte had exposed tensions in Mill’s thinking. As he made clear in the essay On Liberty, Mill believed liberty applied only to ‘human beings in the maturity of the faculties’ — a category that excluded not only children but also ‘backward states of society’. … The end-result would be an illiberal society of the kind Comte admired and Mill loathed, where power was held by experts and freedoms of thought and lifestyle were curbed in the interest of continuing progress.” (p. 91-92)

“Dostoevsky had no remedy for the ills he diagnosed. is political views were shaped by a type of Russian messianism in which a Romantic picture of the country’s culture and place in the world were mixed with pan-Slavism an anti-Semitism. Aside from pogroms and ruin for Russia, nothing would come of this toxic concoction.” (p. 110)

“Here Empson departed from Jeremy Bentham, who believed the satisfaction derived from causing pain was in principle no less valuable than any other. The impulse to cruelty was not a ‘metaphysical evil’. If it had to be curbed — as Bentham recognized it did — it was not because it was bad in itself but because it tended to reduce the total sum of satisfaction in the world. If some means could be found to gratify the impulse while removing the risk, there would be nothing wrong with cruelty. The satisfaction derived from inflicting pain was an elementary good just like any other.” (p. 117)

“Neither the uncertain conditions of his life nor his own restless intelligence allowed Marx to fashion a system of ideas such as the one that bears his name. But Marx did have a view of history that he pursued throughout many of his writings, and Russell was right in thinking that an eschatological myth was at the heart of this view. But it was a myth inherited mroe from Christian Platonism than from Jewish religion. When Marx tells the story of human self-realization it leads back not to Jesus but to Paul an Augustine. Marx’s philosophy of history is Christian theodicy repackaged as humanist myth.” (p. 33)

There are some errors and lacks, of course. (What book doesn’t deserve at least a little criticism.) His view of the origin of Christianity lacks some theological rigor. This shows up specifically in his assessment of the differences between the teachings of Jesus and Paul. I’ll grant him this error because, well, there’s just too much to read. This is a theological question more than an historical one. I believe he might pursue the question with respect to their views of the Mosaic Law. I covered that theological issue here, at least in principle. It’s a good question but it is one that has been answered many times.

All in all it is a useful apologetic read for the Christian.