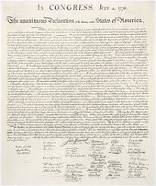 Earlier I presented a summary on the question of natural law. Akin to this is the subject of natural right. Natural right flowis from natural law as its legs for the real world.[1] These rights as they are understood are the proposals of what natural law would seek to accomplish. And like natural law it is understood as not being dependent on any government or institution, not even culture. For instance, the rights to life, to liberty, and to pursue personal betterment are proclaimed in the Declaration of Independence as matters not subject to any governing authority. They are understood as a higher law.

The principle of natural right often has a theological foundation, though not always, and when it does it is not necessarily Christian. Theistic proponents of natural right include Aquinas and Cicero along with Rationalist concepts such as the social contract, positive law/positive liberty, and classical republicanism. The ancient Hellenistic iteration shares features which appear as commonalities between the modern rationalist version and the Christian version. That may be because the Christian concept, notably coming by way of Aquinas, borrows heavily from the Hellenistic concepts. Aquinas’ view of right is constructed around the concept of justice akin to the Aristotelean system.

In the context of Christian theology there is this nagging concern that some of these concepts might be antithetical to evangelical theology today even though they seem less in conflict with the theology of past centuries. Evangelical theology has gone through some changes and turns that seem to alter the compatibility between natural law/right concept and the systematic at play.

Two centuries ago the dominant theology of the evangelical was postmillennialism. The goal of postmillennialism (let’s shorten that to “postmill” for the sake of convenience) is to prepare the world for Christ’s return.[2] Thus the Christian is engaged in creating a better world that is ready for Christ to come back and rule. This includes all the institutions of government as well as private and ecclesiastical enterprises. This spawned the 18th century missions movement and William Carey’s vision and plan to effectively evangelize the world in a century to establish God’s kingdom.

But critics would read the goals of postmill theology in light of theonomist such as Rushdoony who would institute certain aspects of the Mosaic law as national law. Fortunately not all take that position. Some like Kuyper would instead work toward justice in the light of a dominant Christian ethic instead. This would eliminate the potential law-grace issue that the theonomist approach engenders.

(There is a sense where both of these approaches represent a theonomy. One is by way of rule and the other by way of dictate where both are sourced in theology. The difference in how the function is significant. A Kuyperian approach would prove far more tolerant than the Rushdoony approach, thus making society function for the benefit of all rather than for the benefit of the one who accepts the dictates of law.)

The postmill theologian of the past and present, of any variety, thus sees God’s sovereignty in all aspects of civic life. It goes past the individualism of the revivalist and some Anabaptist frameworks. It maintains a community sensibility on a national level, something that premillennialism has a difficult time maintain as a part of its overall theology. America’s founding, with respect to the Puritan movement, was clearly postmill. That “shining city on a hill” set forth the eschatological goal of the coming kingdom. President Reagan employed that same eschatological language in his speeches.

Today’s dominant premillennial (“premill”) theology, instead of preparing the kingdom ,is engaged in preparing people for the kingdom. The concern is more immediate and less social. That means, in revivalist terms, getting people saved for heaven when they die, followed by incorporating them into church life. Theirs is a two-kingdom perspective, thus allowing for secular even anti-Christian government as normative that would exist alongside spiritual kingdom of God (as seen in the church, the bride of Christ).

Yet the premill theologian also sees God as sovereign in civic affairs though not through the church. We have the principle in Romans (13:1) & other passages (e.g., Daniel 2:21) that God ultimately directs human affairs toward an eschatological end, the coming kingdom on earth. Sovereign is not dismissed. It is simply seen as operating in a different context for a different time.

In an odd departure from a theological foundation many premill teachers exit their theological foundation in order to give people some hope of freedom. One hears regular appeals to human rights and (especially) the First Amendment and little if any discussion of I Peter 3 and the Christian response to civic abuse. It seems the premill wants the benefits of postmill theology without adopting it as a system.

If the principles of the postmill sound at least similar to those of the modern progressive (“we can do it” or “we can do better” to make a better world) there is no mistaking the connection.[3] The progressive ideology borrowed from both Marx for its sense of class and from postmill theology for its eschatos of a just society. This thinking became popular to the masses through the folk music movement of the 50s and 60s. Cass Elliot sang it in the popular song “There’s a New World Coming” in the 60s.

There’s a brand new morning
Rising clear and sweet and free
There’s a new day dawning
That belongs to you and me
Yes a new world’s coming
The one we’ve had visions of
Coming in peace, coming in joy
Coming in love

Yes a new world’s coming
The one we’ve had visions of
Coming in peace, coming in joy
Coming in love …

This is the popular democratizing of the dream of a new and just world. It rejected the world, and specifically the nation’s current system of government, as being unjust and hateful.

Within the progressive hope for a better world is the explicit concept of natural right which is usually entitled positive liberty. President Obama argued for this with respect homosexual marriage and health care as well as other matters. He expressed it clearly on several occasions, notably in his farewell address.

Natural right is also seen in the United Nations (conceived in principle during the Progressive Era) Universal Declaration of Human Rights. It begins like the Declaration of Independence but without God as it states:

Whereas recognition of the inherent dignity and of the equal and inalienable rights of all members of the human family is the foundation of freedom, justice and peace in the world,

The progressive movement has thus borrowed from postmill Christian theology the constructs needed to create an equivalent. A skeleton of the theology intended to serve a secular function.

The Question of Permanence

For the Christian it seems proper to ask the origin of natural right. We may treat it the same as we treat natural law, as a creation of God to serve the goal of human flourishing. But is that right? Is this a correct assessment of the situation Though these laws and rights transcend human existence they are none the less contingent rights. They were created to be consistent with the character of God.

This is where questions develop for both the Christian and the secular view of natural right.

What happens as theology develops? What if we through some period of change where we, while remaining orthodox in our theology, view the contingency of natural right as something less than fixed? Perhaps our concept of natural right could change so that ‘natural’ does not require these rights to be fixed but are instead fungible? Then the question becomes: On what foundation do we really have the right to life and liberty? Is that not entirely in the hand of God to grant and not for ours to assume?

We might also question the secular expression of natural right as arbitrary rather than fixed. Does “universal” require them to be fixed? What if another worldview sometime in the future would dominate the United Nations and its proponents subsequently draft a differing set of rights? Is not a democratic drafting method by its nature arbitrary and developed as the constituency would vote?

We might then conclude: If these ‘natural rights’ (whether from a Christian or secular framework) are truly natural and inalienable (that is, fixed and permanent) then why would they be either added to or subtracted from? What is it that makes the US Declaration of Independence normative for humanity?

We see in the Word that God is the giver of life. A reading of Job serves this better than any sermon. God is sovereign. He takes life, He gives life. He gives pleasure and he gives pain. He restrains evil and he allows sin. Job seems a sound within its pages as an argument against a fixed body of natural right.

This raises questions about our gospel and ethical presentations: Are we mistakenly communicating an American ideal as though it is part of our theology? I suspect we are. The idea of natural right (the Christian version) would not communicate the gospel correctly in North Korea or Pakistan. In short, it may even taint our presentation. Let’s be careful to keep our gospel Biblical.