A Picture of Apologetics

Apologetics is generally given this definition: The defense of the faith. But having a distinct definition does not isolate it from other theological matters. I understand apologetics as a part of one’s theology and not an appendix or adjunct discipline. Problems arise when apologetics is removed from theology.

Much of today’s apologetics is oriented around the question of probability. The question is asked “Is it necessary that God exist?” That is an inductive question. It seeks to find that God must exist according to the laws of logic. Thus for anything to exist God must first exist. Whether one employs one of the classic ontological or cosmological arguments or the more current Kalam cosmological argument the conclusion is the same: One must be persuaded by Logic and Reason.

The same question arises with respect to discussing the resurrection. Did it happen? Of course it did. But the persuasion approach says that, given the evidence, one must in one’s mind be persuaded as to the likelihood that the resurrection happened.

This presents us with a problem. Our thoughts, our perceptions, these are internal matters. They do not actually answer the external truth question of the actually of God’s existence, the resurrection, or any other fact up for discussion. That’s because inductive reasoning concentrates on the mind of the person rather than on the external facts.

This approach is, of course, not entirely false or erroneous. Hebrews 11:6 says the person of faith is committed to two principles. The first is God’s existence and the second is God’s gracious character. These happen internally. Where the difference comes is how far the reasoning is taken. Kevin Diller stated it well in “Theology’s Epistemological Dilemma,” stating

The deployment of natural theology in the service of apologetics fails because instead of challenging human rational self-sufficiency, it panders to it.

So why don’t people respond to what seems to be logically necessary? Some of us have this habit of making “logical necessity” the same as the result of a deductive argument. It seems so absolutely right to us. In the end not everyone gives the same weight to all of the evidence. Though we might want to cast blame on fallenness (some of the blame goes there, but not all of it) it may be that we have some unreasonable expectations. We need to stop acting like an inductive argument carries the weight of a deductive argument. What seems necessary to us may not be to someone else. That’s what happens with an internalist approach to apologetics.

Reason has its limits.

Yet the approach has led some to misinterpret Roman 1. To begin his letter to the Roman church Paul first argues that all of humanity is lost. The gentile world without the law is lost and also the Jewish world with the Law is lost.

But some might ask, what of the gentile world? What of God’s revelation of Himself in nature? Is this not sufficient for people to come to faith? Romans 1:19-21 is cited and this argument is used: “There is revelation to which people might respond.”

This presents us with a problem. If Paul was clarifying that the world is lost, how can he be implying that the world is not necessarily lost, that through an understanding and proper response to general revelation one might find the one true creator God? This argument completely undercuts Paul’s argument about the lostness of all of humanity. It allows Reason as a human capacity to be sufficient to find God through general revelation.

Reason is insufficient for finding God. 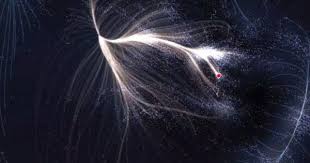 Have you argued from the big bang theory for the existence of God? Many do. But have you taken a look at the empirical studies that exist apart from the theory? Look at the map of the known universe, the clusters of galaxies, the shape of the universe.

It seems that this is not what happens after an explosion. This is more like a string. There is no sense of center from that predicted quantum beginning. For this reason, among others, there are other models to describe the beginning of the universe. But it is likely that none of them is accurate, though some may be closer than others. We just don’t know.

That’s the thing about an explanatory model: Without sufficient evidence these models are little more than sophisticated guesses. There just is not enough evidence for any of them, including the big bang theory, to draw a conclusion that would be anywhere near an accurate explanation.

So, are we going to argue for God’s existence from what might well be an error?

There may well come another theory in a few years that upends the big bang theory. Will we glom onto that new proposition and look like fools who jump on the next bandwagon?

Apologetics arguments can often be reduced to “Therefore God” when what we really want is to say “God. Therefore.”

An apologetic that remains philosophical may have a difficult time affecting life issues. We may be able to communicate everything about the resurrection, the potential for miracles and creation, and all of today’s popular apologetics issues. Don’t get me wrong – these are important. There are many instructors in secondary and higher education who are often completely wrong in how they represent Christian history, theology, and principles. These things require correction. But are they everything that affects life?

One of Christianity’s greatest impacts on the world has been in the area of ethics. A number of issues have their source in Christian, even evangelical Christian, ideals. The end of the British and American slave trades comes to mind. But let’s be historically honest as well. We got some help from classic liberal ideals which, in parallel with our theology, places a strong emphasis on the dignity of the individual. Yet liberalism, because it tended toward a libertarian view of the individual, was insufficient to the task. John Newton wrote Amazing Grace after being saved, not just from sin in general, but specifically from the sin of being a slaver.

Amazing Grace represents the positive impact of the Christian ethic in the social, economic, and political worlds.

The problem of slavery continues. It is being confronted largely by the Christian voice. Politicians do what politicians do, which is to respond to public pressure. Some of this slavery is adult sex slavery. We see that in prostitution, but also a growing problem of household sex slavery. Some of it involves children. The problem is deep and not limited to any nation or people group.

The most obvious current issue is abortion. But it’s not just abortion – it’s the question of human dignity against utility. Are we just machines, “human resources” as your employer likely calls it, or are we created in the image of God? What happens next is to answer this question of human dignity. The fruit of one answer has led us to abortion, infanticide, and active euthanasia.

Arguments in favor of utility would tell us to “leave religion out of it.” The dignity of the individual as bearing the image of God is sourced in Scripture, James 3:9-10. But there are some who would argue for life from Reason. While we would find Reason insufficient it’s a least a start and these pro-life atheists deserve our respect and strategic partnership, for their motivation has its roots in Christian morality.

The question of gender has gotten a lot of attention the last few decades. In a sense it parallels abortion as an expression of the sovereignty of the individual. But instead of the primary feature of utility it presents a mix of utility plus a thing called neo-Platonism, or perhaps even Gnosticism. It seems that some have found greater enlightenment by allowing their perceptions of self to take precedence over their biological reality.

This situation created a change in language. We used to use the maxim “words have gender, people have sex.” That meant the terms “male” and “female” were biological applications whereas “masculine” and “feminine” were linguistic expressions.

The old language is now unacceptable.

The Christian argument on this is multi-fold. There’s a place for discussing creation, blessings on marriage, sin, and redemption from sin, each in its proper place.  We do well to continue developin a rich theology in this area. (See “Love Thy Body” by Nancy Pearcy).

Have you heard the term “cage ready?” It describes people who are so excited, so enthusiastic, so obnoxious about a subject that it covers everything from ethics to ice cream. These people don’t think, don’t dialogue, don’t care. Don’t be that person.

If your apologetics involves debate, made certain that you can still go to coffee with your opponent. That means your emotions are in check and you know how to handle a relationship. Then do it. Be at the same time loving and dispassionate. You’ll find that a relationship supported by prayer will win as many or more than a public debate.