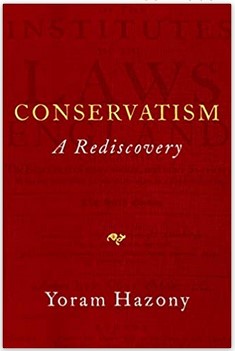 (Caveat: I cover not just the material in the book but do editorialize some. This is because I find this era fascinating and challenging. There’s a lot that he covers very well and some adjunct information that might help the reader with other material to enhance one’s understanding of the period.)

One of the things about studying theology is that I also get to study history and philosophy at the same time. The net is that there is nothing that happens in isolation. The world moves along by way of ideas. Ideas form minds. James Burke (“The Day the Universe Changed”) and Richard Weaver (“Ideas Have Consequences”) were right; Marx was wrong.

What Mr. Hazony has done here is provide that blending of ideas with the people and events that moved half of the globe. Not just the U.S. The Ideas moved England and the rest of the world. Not just the idea of liberal democracy but something deeper, the idea that there is something bigger than us.

The problem we face as conservatives is liberal democracy. What was once touted as the ideal system to bring freedom to oppressed people around the globe has now been reduced to just one more power system that suppresses human flourishing. What we call liberal is actually illiberal.

A number of steps were taken to get to this point. And while it is easy to romanticize the happenings of history, Mr. Hazony implicitly challenges this oversimplification of history and brings the reader to a rich understanding of the challenges. For instance, in 1860 we might have though of the federalists as being anti-slavery but in 1780 many of them owned slaves. Likewise, the libertarian ideals of the anti-federalists are today the dream of some, those ideals were then part of the slave-holding confederacy. In other words, it’s not so simple as we might like to think. As your read this book you will appreciate his thoughtful inclusion of the movement of ideas.

Also significant Is his dealings with the problem of Enlightenment assumption, in particular that things like freedom and liberty are universally understood. These assumptions are a problem as they occurred within a generally Christian world and were never tested within other systems of thought. Is personal liberty a normative idea within Islam, or Hinduism, or perhaps in the pre-Columbian Americas? The assumptions of the Enlightenment have proven false.

“The Challenge of Marxism” covers the dilemma that liberalism faces. How does a classic liberal, or even a Kennedy-style soft progressive, deal with the harsh demands of the hard Marxist? The movement had no answer as it had and has been pandering to Marxism all along. Classic liberalism lost its foundation when progressivism took hold of the movement. (It is no mere coincidence that both classic liberalism and classic conservatism collapsed around the same time.) This section is thorough and not to be read quickly. Well, obviously this applies to the whole of the book, but this has a direct correlation to many current events and as such the application is strong.

Things I Would Have Liked to See

I had a hope that he would deal more with the contribution of postmillennial theology to conservatism. It seems to me to, on one hand, describe all nations as having a metaphysical foundation but, on the other hand, ignore the foundation of this movement, reducing the particular structures of postmill theology to being simply “Christianity.”  The contributions were significant. With that one addition I think this would be a complete work.

The definition of what it means to be conservative has its historical foundation. Yet, as it arose at the same time, it seems to pander to classic liberalism. This made me long for the simpler philosophical definition of conservatism as an aesthetic hierarchy and build from that. But that’s my preference. His presentation is sound.

All in all, this is a fine work and worthy to be in your library. If you happen to be of a liberal and leftist mindset and want to know “what are these people thinking?” well, now you have your answer.